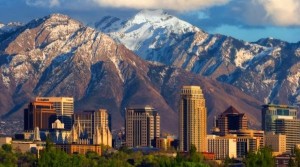 Salt Lake City Apartment Market has an overall vacancy rate across the Salt Lake Valley of just 3.9%. This is the lowest vacancy rate recorded over the past decade and represents a steady decline of 2.7% over the past 5 years. Over the same period of time the average rental rate has increased by a healthy 3.5% per year. Apartment demand is projected to outpace supply due to the strong job growth in the region.

Salt Lake City Industrial Market posted its highest level of growth in over 6 years. New available supply has helped to open up a previously tight leasing market for large warehouse space. Although the demand for larger space remains high the increase in availability is expected to be temporary and move back downward through 2015.

The Salt Lake City Office Market will see moderate levels of job growth in the Salt Lake metro area which will continue to fuel demand for office space. Positive net absorption is expected to continue through 2015. Large amounts of new space hitting the market, along with healthy demand, may put upward pressure on lease rates.

Dallas Texas’ economy is broadly expanding and generating plenty of new demand for industrial space and enabling operators throughout the region to raise rents. Occupancy sits well above the levels posted in the aftermath of the recession. New industrial construction has caused some increases in vacancy as the demand catches up to the new supply. The average rent in the market will climb to an estimated 6.0% to $4.45 per square foot this year. All in all the numbers look promising.

The Puget Sound industrial corridor (Seattle, Everett, Lakewood, Kent) has 3.4 million square feet of industrial buildings under construction, the most since 2008. Leasing activity remains steady, however, demand will be outpaced by new construction in select market sub-markets. The vacancy rate rose slightly during the last quarter of 2014 with average asking rents remaining steady.

Las Vegas has had a slow but steady job market increase over the past 4 years and will continue into this year allowing for 28,000 new jobs in 2015, resulting in an increased demand for housing. Unfortunately not enough growth to put significant pressure on rents to recover to pre-recession levels. Housing demand has intensified near the strip and office/retail employment hubs. With that said we will see effective rents up by 3.4% with the vacancy rate dropping slightly. Retail/Commercial vacancy rates are improving, but resulting in lease rates at an all-time low in the 20% range.

San Diego apartment rental demand is strong due to increased employment growth for the second consecutive year. Only 2,700 new apartment units will be completed this year which represents only a 1 % rise in stock. As a result, supply and demand will mirror each other in 2015 leaving vacancy at 3.2% causing healthy rent gains. Investors will remain focused on the neighborhoods surrounding downtown San Diego, including North Park, South Park, University Heights and Hillcrest.

The Inland Empire economy is improving with the net gains in employment of 2.7 % creating 35,000 new jobs. The unemployment rate is down to its lowest point since the recession at 8%. Developers will deliver 570 apartment units to the market in 2015, increasing the supply by 0.3%. Builders will remain focused on areas near employment expansion. The vacancy rate will decrease to 4% and average effective rents will jump 5.6%.

Industrial demand is holding steady with warehouse and distribution activities being a principal driver of the local economy. Space demands are also increasing, pushing down vacancy in the Inland Empire, this is likely due to new tenants like Amazon, BMW and Discount Tire committing to large blocks of space in the market.

Phoenix’s employment forecast indicates that employers will create 44,600 jobs in 2015 expanding payrolls by 2.4%. Steady job creation and subdued single-family construction has limited the

attrition of renters into homes due to fewer opportunities to purchase. Additionally, the constrained supply is pushing up home prices in the most desirable neighborhoods which is helping to maintain a healthy rental pool.

Retailer expansion is elevating industrial demand for distribution and manufacturing facilities in the Phoenix market. Tightening conditions and improving occupancy has caused steady rent growth of 6.7%. Property values are increasing due to improving market fundamentals and a more active investment market.

* The information contained within this report is gathered from multiple sources considered to be reliable. The information may contain errors or omissions and is presented without any warranty or representations as to its accuracy.

© 2020 WLA Investments | All Rights Reserved
Back to Top